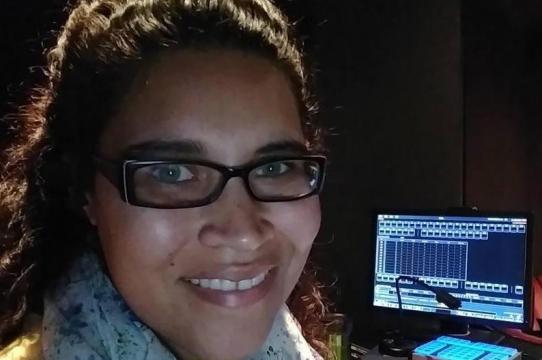 Back in 2003, Sherrice Mojgani left her home in Orange County, Calif. to make her way to UC Santa Cruz and arrived to what she thought of as the most beautiful place she’d ever seen. Since UC Santa Cruz not only had a gorgeous campus overlooking the ocean, but also had a thriving theater department, she knew it was the right choice for what she wanted to do.

As a resident of Merrill College and part of the freshman honors program, Mojgani met with the honors students once every quarter and has fond memories of John Schechter, professor of music, who was the provost at Merrill during that time. “I think his teaching style, which was deeply devoted to focusing on our thoughts and ideas, was a bit surprising to me at first, but it shaped the way I moved through the rest of college, and how I teach now,” says Mojgani.

While in high school, she had already decided to pursue a career as a lighting designer. “I discovered that by working on lighting I could contribute to every moment of the play without having to go to rehearsal or learn any lines or dance – all things in theater that I didn’t much care for.”

Her mother, who Mojgani admires as a wonderful role model, raised her as a single parent while working full time for Caltrans. “Her job was boring but important and necessary, and she was one of the few women in the State that did that type of work,” she says. “I’m mixed race and my mom is white, so as a kid all of my cultural touchstones were very white, mainstream American ideals.”

Being a part of the Rainbow Theater and the African American Theater Arts Troupe (AATAT) at UC Santa Cruz played an enormous role while she was a student. “Rainbow AATAT, and Don Williams [Theater Arts lecturer] were all incredibly important to my college experience,” says Mojgani. “I felt empowered by these programs to make theater for and about students who looked like me. There was also no need to prove myself at Rainbow. We were always enough. Our skills were appreciated and we were taught we always had something to contribute.”

Don Williams has fond memories of Majgani when she was a student. “Sheerice has always held her own, striving to put her best effort forward on whatever production she was working on,” said. “A true team player and very supportive of her colleagues of AATAT and Rainbow Theater. She’s always demonstrated purpose and vision within technical world of theater!”

During her summers, Mojgani kept busy learning her craft at Shakespeare Santa Cruz, lighting major plays including King Lear and All’s Well That Ends Well. In an interview she gave to Stage Directions, she also credits David Lee Cuthbert, UC Santa Cruz professor of design and chair of the Theater Arts Department, as being a role model and helping her to develop her career. “David also went to UCSD, and designed some shows in San Diego when I moved there for grad school, so I assisted him and got my foot in the door.”

Professor Cuthbert said of Mojgani: “One of the great joys of being an educator is working with someone like Sherrice and seeing her go from apprehensive undergrad –Can I really do this? – to confident graduate student, highly sought-after professional, and now a professor herself.”

After earning an M.F.A. in lighting design from UC San Diego in 2012, she was always able to find steady work, handling lighting design at many prestigious venues including the La Jolla Playhouse, South Coast Rep, San Diego Repertory Theatre, and, and in 2017 her first play on Broadway at the Schoenfeld Theatre.

But being a person of color in the theater industry has had its challenges.

“I have had no mentors that looked like me,” says Mojgani. “It means that it was very difficult to look at a mentor and see a future for myself or see a clear path to get from where I was to where they were because I was dealing with a different set of personal circumstances.”

In spite of the obstacles, Mojgani persevered and became active in the United Scenic Artist 829 bringing diversity issues to the forefront, and now serves as the co-chair of the Diversity Committee for that Union. She’s also part of the Design and Production Diversity Working Group on Facebook, which is a supportive community of industry people from various parts of the U.S. who discuss issues around diversity and inclusion in the workplace.

Working now in Washington, D.C. and living just outside of the city in Manassas, Virginia, with her husband and young son, Mojgani has been continuing to design for prominent theaters, including the Arena Stage and the Signature Theatre. She’s also an assistant professor in the School of Theatre at George Mason University.

Juggling being a parent, a lighting designer, and a professor definitely keeps Mojgani on the go. She’s finding that you can only do one of them really well, one at a time. “Sometimes you have to switch hats every five minutes, and you have to give into the job of ‘mom’ fully. You can’t do it part way – a child demands 100% of your attention in the time that you devote to them. And, of course, that need is constantly changing.”

As an educator and person of color, Mojgani is very aware of how important it is for her to be a mentor for students who are also people of color. She takes the time to sit on various committees in order to ensure that all voices are heard. “A lot of emotional labor is required,” she observes.

Mojgani is very encouraging when it comes to giving advice to students who are interested in pursuing lighting design as a career. “Do it,” she advises. “When you’re new to lighting, you learn so much just by doing a show, something with a student group….The more you practice the better you will get.”

She urges students to get involved in community theater, observe tech rehearsals, and get on a solid career path by being an assistant lighting designer to learn the craft from the ground up.

“To POC [people of color] students who want to be theatrical designers…do it! The industry is much more aware now of the benefits of diversity. I’m not saying it’s going to be easy. But we have started doing this work, and we are excited for you to join us.”