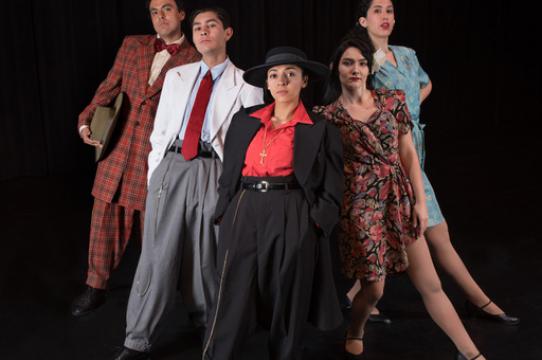 “Forget the war overseas, carnal. Your war is on the home front.” — El Pachuco

Why revive Zoot Suit? Valdez’s combination of ripped-from-the-headlines subject matter, the themes of pride and inclusion, the heightened theatricality, and the celebration of Chicanx culture makes this vibrant, funny, poignant, colorful play worth performing at any time.

But we are not producing a museum piece, even one as good as this one, whose 1978 premier at the Mark Taper Forum was so popular the papers called it “the Second Zoot Suit Riot.” On the contrary, the social factors that made Zoot Suit so relevant to audiences in Los Angeles, New York, and all over the U.S. in 1978 grant the play a new, or perhaps merely more visible, signicance for audiences in 2017. In 1978 Zoot Suit was a rebuke to mainstream American culture for its lingering refusal to allow Mexican-Americans to participate in the American Dream as much as it was a celebration of a different vision of what it meant to be American; a vision as uniquely and authentically American as those represented in the plays of Eugene O’Neill, Tennessee Williams, Arthur Miller, and Lilian Hellman, but one that remained barely recognized as American at all. Zoot Suit was also a battle cry to all the eses and carnalas to póngar más abusados and demand the respect that white culture continued to deny them. “Forget the war overseas, carnal. Your war is on the home front.”

In January of 2017 the Center Theatre Group in Los Angeles revived this, possibly their most celebrated and influential hit, to a freshly riotous reception. The play was a smash, sold out for three extensions into early April. Audiences might have come expecting a nostalgic experience, to revel in the kitsch of a beloved piece of culture from their youth, but that is not exactly what the revival delivered. The play received a fresh interpretation: undoubtedly the openly racist, unapologetically divisive, and even gleefully hateful rhetoric that dominated the 2016 US Presidential Election has granted a fresh relevance to Zoot Suit even as it has spurred a new rise in prejudice, vandalism, and violence directed at ethnic minorities. Our community is not untouched by these changes. ICE raids unthinkable only a few months ago have become a regular occurrence even here in Santa Cruz, splitting families and punishing some guilty of only bureaucratic infractions. DACA Students at UCSC who were recently confident in their status are now afraid to file for scholarships or register for classes for fear of suddenly getting targeted. We are a community of immigrants and we are getting a taste of the kind of fear that made the Zoot Suit riots.

Valdez revised the play for its 2017 production— we are the second producing company to perform this new script. The revisions are subtle, minuscule even: a word here, a phrase there, perhaps a quiet indication of a different emphasis on this line or that gesture. But the women of the play emerge stronger, with more theatrical power and depth, befitting a society more awake to the perils of sexism. In fact, we are the first fully-produced, Campesino-sanctioned production in history to feature a female actor, Gianna DiGregorio Rivera, in the role of El Pachuco. The rebuke to the failures of the American Dream to include ALL Americans remains, but Valdez subtly reminds us that Chicanos weren’t the only ones to be denied that dream— and that some who thought themselves secure in that dream might find it precipitously revoked. Still specifcally and pointedly Chicano, the play now invites all ethnic minorities to remember that white supremacy can be fickle about whom it allows into its protection, and whom it targets.

The other important, and convergent, theme this play visits is the immense power of the press—a potentially maleficent power, when abused, that can enervate public discourse even as it alchemizes latent fears into raging hatreds. This phenomenon tends to metastasize when tensions about outsiders run high—when a war is on, or when a country faces (or thinks it faces) an existential threat. Rather than directing reasonable energies to combatting the external threat, the mood of the public tends to turn inward, to attack internal threats real or imagined. Zoot Suit 2017 reminds us that this phenomenon is not at all mired in the benighted years of the Great War, but has become rather the background noise of our everyday political envi- ronment.

The Chicano resistance to hatred and the subversion of civil rights celebrated in the play is a lesson for all humans. Zoot Suit’s legacy is to remind us that the American Dream, if it does not include all Americans, is no dream at all.