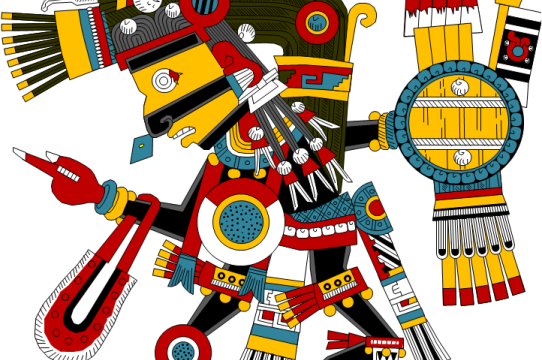 The Aztecs sustained a highly complex theology, which embraces the concept of multiplicity.

Firstly, the Aztec story of the creation of the world chronicles the creation and destruction of multiple universes in a chronology that does not definitively acknowledge any particular universe as the true or even contemporary one. Instead there is a suggestion of multiple versions of events, with no hierarchy of correctness between them, and no mutually exclusive boundary.

The concept, in essence, is that the cosmos is vast enough to embody multiple, perhaps conflicting, truths at the same time. This ideology is of particular interest to this production considering the multiple and conflicting but simultaneous endings of Henry Reyna’s story. A second way in which Aztec Mythology highlights multiplicity is in its appreciation of the opposing forces of order and chaos. An important thing to note when examining this binary in the context of Aztec culture is that neither one of these concepts is considered objectively good or evil.

The god Quetzalcoatl is associated with harmony, order, and daylight. Meanwhile his brother and counterpart Tezcatlipoca is a trickster god of conflict, chaos and is often associated with night, which to the Aztecs was a time where the boundary between the natural and the supernatural blurred, inviting dynamic spiritual change. His colors are red and black, like those of El Pachuco. A trickster figure, Tezcatlipoca upsets the status quo wherever he goes—it’s not always clear if he is a villain or a hero.

But in Aztec cosmology, Tezcatlipoca is no more or less good or evil than his brother, Quetzalcoatl. Nor are the concepts he embodies any more or less important to cultural discourse or spiritual wellness.