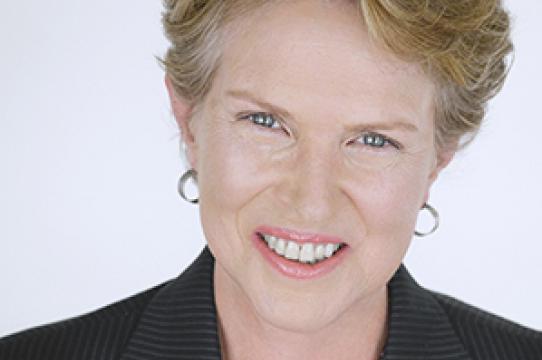 Solt comes to the campus from the California Institute of the Arts School of Theater (CalArts), where she is a longtime professor of theater. While at CalArts, she served as dean for eight years (1995-2003), during which she was also founding artistic director/producer of the CalArts Center for New Theater (renamed the Center for New Performance in 2006).

Prior to that, she was senior vice president of production for Miramax Films and an award-winning producer of feature films for Warner Bros., including Presumed Innocent starring Harrison Ford and Doc Hollywood with Michael J. Fox.

“I could not be more pleased that Chancellor Blumenthal and EVC/Provost Alison Galloway have honored me with the extraordinary opportunity and responsibility to lead the UC Santa Cruz Arts Division,” said Solt. “This is a critical time for the arts and arts education, and I embrace the chance to serve this great university with its dynamic leadership, impressive programs, its stellar faculty, exceptional and devoted staff, and its talented, eager and promising students.”

“My mission will be to champion the arts through the Arts Division in the face of increasing challenges, on stages both local and international and with all constituencies,” Solt added. “With humility, I hope to be the transformational leader who has the proactive vision to lead the Arts Division into a future of prosperity, while building on UC Santa Cruz’s legacy, its relationship with the community, with stakeholders beyond, and with its alumni.”

Solt’s training and background are in theater and film production.

She earned her M.F.A. in theater administration from the Yale School of Drama, as well as an M.A. in African American studies, an M.A. in U.S. history, and a C.Phil. in Atlantic history from UCLA, where she is completing a doctorate. Her dissertation is titled The Biography of Othello: A Signifying Life in the History of the Construction of Race.

Solt is also completing a book based on her popular CalArts entrepreneurship class titled Da Vinci’s Mindset: The Artist’s Life of Purpose Through Creative Entrepreneurship.

“I am delighted that Dean Solt will be joining us,” said Alison Galloway, campus provost and executive vice chancellor of UC Santa Cruz. “I particularly appreciate her commitment to enabling students to plan for careers as artists, expanding their opportunities to pursue their creative activities to the fullest.”

Solt studied acting in London and has worked closely as a producer with Academy Award-winning filmmaker Alan J. Pakula. Her film career began with Pakula's Sophie's Choice, starring Meryl Streep and Kevin Kline. Among her duties, she served as Streep’s Polish dialect coach.

She also worked with Jerzy Grotowski of the acclaimed Laboratory Theater in Poland, and as a producer with executives at Warner Bros. and 20th Century Fox. In 2002, she won an NAACP Theatre Award for an internationally acclaimed, site-specific, all-female production of Shakespeare’s King Lear.

“This is not just an exciting appointment for me, it is a dream come true,” Solt noted. “My entire life has prepared me through a range of contexts, as both a cross-disciplinary practitioner and as a scholar, to be a leader of all the arts.”

“Having grown up on the campus of a state university as the daughter of two professors, a historian father, and a poet mother, I welcome this opportunity to represent the arts on the campus of a great public university--one that enchanted me and has stayed in my imagination since I first visited the campus as a child many years ago,” she added.