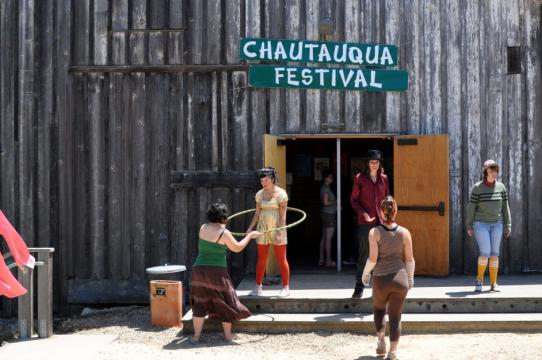 The UCSC Chautauqua Festival made its debut in 1979 in the Barn Theater, modeled after a tradition of theater festivals that began at Lake Chautauqua, New York, more than a century ago.

The festival is an entirely student-produced showcase of student plays, films, and other works that takes place annually in the spring quarter. It is a fantastic laboratory for students to gain practical training in their desired area of focus, to have the opportunity to explore new facets of theater, and to experiment with theatrical forms and themes in a setting not bound by tradition or profit.

As Chautauqua is entirely student-produced, the production management team for Chautauqua divides up the numerous tasks of producing the shows amongst all students involved in the festival. This means that in addition to acting, you may find yourself operating a light board for another show or even designing for its costumes. In addition to designing, you may find yourself posting flyers or ushering. Chautauqua is a huge project, and all students can come away from it rewarded with more experience and appreciation for all the different roles that go into producing good theater.

Students involved in Chautauqua will enroll in it as a 5-unit class that counts as credit towards graduation, though not the Theater Arts major or minor. Submissions are accepted during the winter quarter. Directing proposals for the selected plays are due toward the end of the winter quarter. Auditions for Chautauqua are held at the beginning of spring quarter. For any other positions within Chautauqua, including stage management and designers, students can contact the Barnstorm/Chautauqua director(s) at any time, or sign up at the Chautauqua Interest Meeting, generally held the first Monday of spring quarter, after the Theater Arts Department General Auditions. Students of all levels of experience in the theater are encouraged to come and be a part of Chautauqua and learn the basic skills and love that can lead to a future life-long career.

For more information on Chautauqua, and current dates for upcoming submissions, auditions, or meetings, check the Barnstorm Theater website or contact the Theater Arts Department, theater@ucsc.edu.