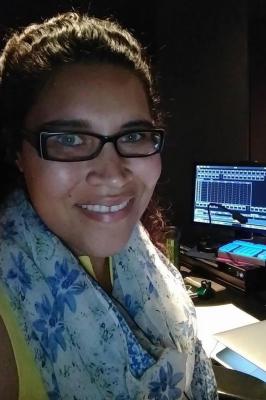 Freelance Lighting Designer SHERRICE MOJGANI arrived at UC Santa Cruz in the fall of 2003. A Merrill resident, she enjoyed an early morning trek across campus to Theater Arts, whether for an 8am class or a light hang. Sherrice was a member of Rainbow Theatre and AATAT, she saw the beginning of Barnstorm, and she spent several spring quarters working around the clock in the Chautauqua office. During her senior year, she was the CUIP student production liason. Sherrice was also fortunate enough to get a taste of what a career in theatre could be with her three summers working for Shakespeare Santa Cruz.

Since graduating, Sherrice has worked in Cleveland, Arizona, Maine, New York, Canada, Italy, and is now based in San Diego, where she received her MFA in Lighting Design from UC San Diego and met her now-husband, Naysan. Sherrice is a proud member of United Scenic Artist 829, and volunteers her time and efforts on the union’s Diversity Committee, working to improve conditions and representation for all artists. For the last two years, she has assisted Howell Binkley on Come From Away, starting with the show at La Jolla Playhouse, and moving with it to Seattle, DC, Gander, and Toronto, somehow finding time to have her first child, Jonah, along the way. In Spring of 2017, Sherrice got her first Broadway credit, as Associate Lighting Designer for Come From Away. Now, as a working designer, diversity advocate, and new mom, Sherrice’s journey continues! Thank you, UC Santa Cruz, David Cuthbert, and all the faculty, staff, fellow students, and artists who have had a hand in making this life and this career possible.