STRANGE WINDOW: The Turn of the Screw 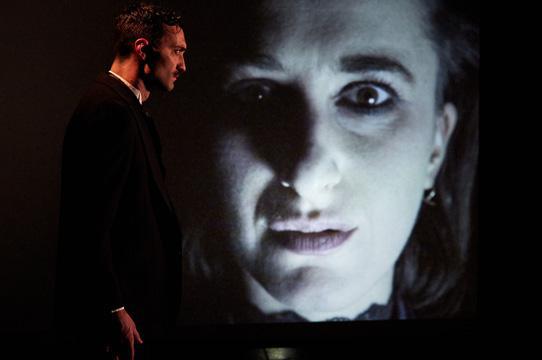 The West Coast premiere of a new interpretation of the Henry James gothic classic, directed by renowned stage director and UC Santa Cruz Professor of Theater Arts Marianne Weems. Presented by the Arts Division, in partnership with the Theater Arts Department.

This groundbreaking version of James’ 1898 horror novella is presented by the internationally celebrated, New York-based, and Obie Award-winning theater company The Builders Association of which Ms. Weems is the artistic director.

Created by Weems, along with Moe Angelos, James Gibbs, and the company, this production employs clever stagecraft, haunting media design, and seductive storytelling to defend the sanity of a woman, while holding the audience under her candlelit spell.

Strange Window: The Turn of the Screw provides audiences an exceptional opportunity to see this world-class production locally before it goes on to one of the most important performing arts venues in the world at its New York engagement and East Coast premiere at BAM, The Brooklyn Academy of Music, as part of its prestigious 2018 Next Wave Festival.

The production is co-commissioned by BAM and The Krannert Center for the Performing Arts (University of Illinois at Urbana-Champaign) and co-produced by the Arts Division of the University of California, Santa Cruz, and 3LD Art & Technology Center.

Tickets on sale at UCSCTICKETS.com

Small theater. Limited seating for each performance.
Purchase tickets in advance to guarantee admission.
Tickets are not guaranteed at the door.
Performance runs approx 70 minutes.
There is NO intermission.

About the Builders Association theater company
The Builders Association is an influential, award-winning ensemble that has created a significant body of work at the forefront of integrating media with live performance. Since 1994 they have created original productions based on stories drawn from contemporary life and use the richness of new and old tools to extend the boundaries of theater. The New York Times has said: “The Builders Association makes other multimedia theater look as if it’s from the Stone Age.”

With the company, Weems has created and directed 17 original large-scale productions and worked with unexpected collaborators including the architects Diller + Scofidio, The National Center for Super Computing Applications, and the South Asian arts collective motiroti. Their work has toured domestically and internationally to over 80 venues including the RomaEuropa Festival, the Festival Iberoamericano de Bogota, the Seoul Festival, the Melbourne Theatre Festival, Lincoln Center for the Performing Arts, the Whitney Museum of American Art, and the Guggenheim Museum.

West Coast touring has included several productions at Yerba Buena Cetner for the Arts in San Francisco, La Jolla Playhouse, the ZeroOne Festival, and REDCAT. Their last four productions have had New York premieres at The Brooklyn Academy of Music.