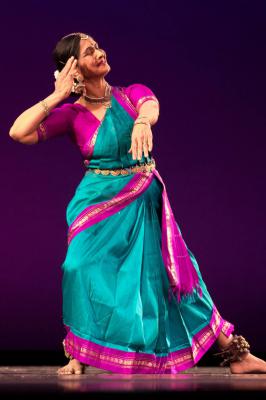 As founder and director of the Abhinaya Dance Company, Mathyli Kumar has trained over 100 students in their solo dance debut recitals or arangetrams. Mathyli Kumar has taught at San Jose State University, Stanford University, and a fall semester course in Indian dance for the past five years at University of California, Santa Cruz.

The Mother (Annaiyai Maravenadi)– a 45 minute piece on varied facets of the mother in the world. (November 1997)

Sudha’s Story - dance to poem by Chitra Divakaruni about a young Indian dancer married to a jealous, abusive husband whose actions provoke her to take revenge (May 1998)

Nandanar Charitram- a 25 minute presentation of the travails of the outcaste farmhand, Nandanar (April 1994)

Navarasa  - portraying the nine basic human emotions featuring solo numbers on ‘Panchali Sabadam’- the vow of Draupadi, and others. (November 1989)

Tropical Flower – a collaboration with the poet Chitra Divakaruni for the Asian-Pacific Performing Arts Series; (March 1994)

Transition - depicting the conflict of an Indian immigrant to the U.S. (April 1992)

Over 50 solo pieces in the traditional repertoire format with new selections and lyrics.

Power of Saturn - a collaborative concert with ShadowLight Productions portraying the myth of King Nala who incurs the rage of the planet Saturn, venerated as a vengeful god (March 1999)

Mayiladum Alagan (The handsome Lord on the peacock) - (February 1998)

The Ramayana - a collaboration with Gamelan Sekhar Jaya portraying the Balinese and Indian variations of the epic Ramayana funded by the Rockefeller Foundation (April 1997, Bay Area venues

Choreographers Fellowships from the National Endowment for the Arts, 1989-1993,

Outstanding artist Award from the Federation of Indo-American Assoc, September 1990

Choreographers Commission from the Bay Area Fund for Dance, 1992

Distinguished Artist Award from the City of Cupertino, 1992

Choreographers Fellowship from the Arts Council of Santa Clara County, 1993

Teachers Recognition Certificate from the Natl Assoc. for Advancement in the Arts, 1998.